I did a couple of different alignments below in WinISD so you could have a look at potential differences.

WinISD is available at here it’s well worth a play with to try and familiarise yourself to what effect varying cabinet parameters does to a speaker.

The Pluvia 11 driver is available in our shop here 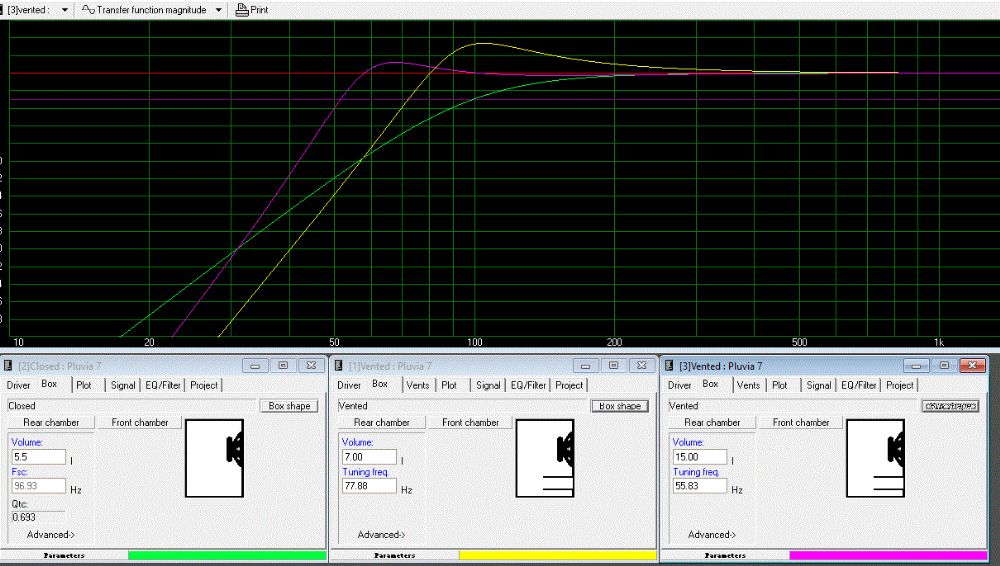 The box on the left and the one with the green plot is a 5.5 litre sealed box, f3 about 100hz with a close to ideal box q of .693. The middle one is a ported design that is as close in size to the sealed box as I could get it to try and demonstrate the difference, the tuning and f3 frequency is a bit lower but there is much more energy at the tuning frequency which can be seen in the bump, some people like this and it is how the majority of commercial speakers are tuned as it makes speakers sound like they’ve got more ‘slam’ although it is one of the reasons ported speakers get labelled as ‘one note’. Its also worth noting that although the f3 is lower, by the time we get to f6 both designs produce the same level and the sealed one carries on producing usable level even lower. The third box is closer to the size that is ideal for this driver for a ported box at 15 l, it produces a much flatter response that goes much lower at the expense of size. It is possible to go lower but the size of the port needed goes up exponentially and a bigger box will be needed to accommodate it. There a few other considerations when trying to go lower with a port, firstly port size, you’ve got to be able to fit the port in the darned box! I like square ports, they are easy to build into a box and create less turbulence for the same cross section. You can see from this image the port sizes I used, in the larger box you can use a larger port, probably exiting at the back, running top to bottom. The next plot is of excursion, this driver allows you 7mm one way (peak) of excursion, the plot shows that at a full 45w continuous you’ll need to do something about keeping the lower frequencies out of the driver or use less power to avoid destroying the voice-coil/former, of course real world, in an average room, not many people are hitting 45W continuous! 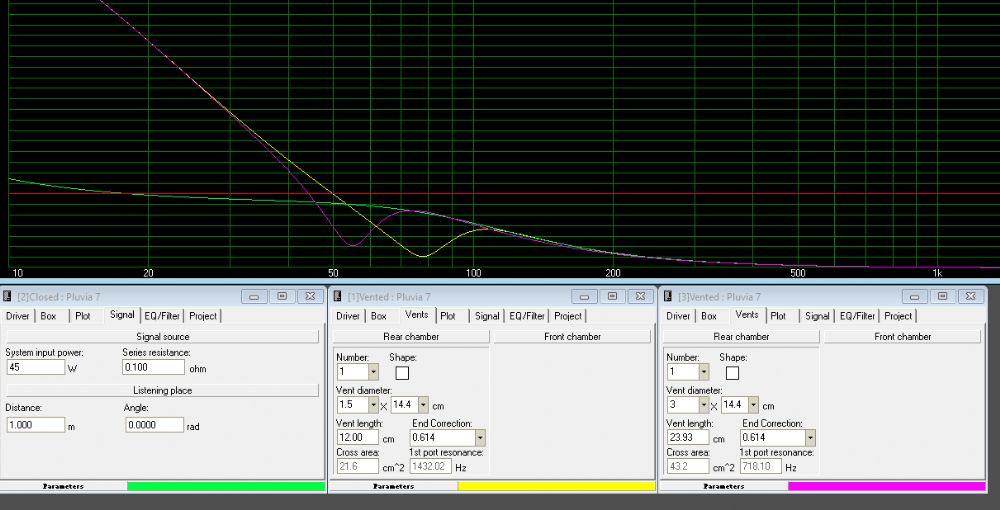 There are two other problems created by porting it’s worth being aware of, one is port chuffing. It’s hopefully fairly obvious that the sound created at the port exit sums with the port created at the driver cone and that is what creates the summed FR that results in the lower f3. The air inside the port resonates back and forth like a solid plug of air in the same way  the the driver cone does, this moving back and forth happens at a given speed that ideally we would keep at below about 5% of the speed of sound to avoid the sound of the turbulence becoming audible (chuffing), that is about 17 metres/sec. A larger cross section (wider port) allows us to keep that slower but as the cross section gets bigger we need to make the port longer. The smaller of the 2 boxes is reasonable and probably better than a lot of small speakers out there at 20ish m/s, the bigger box has a wider port at 3cm instead of 2 cm but the bigger box allows a longer port, the result is much slower port velocity which won’t be audible. 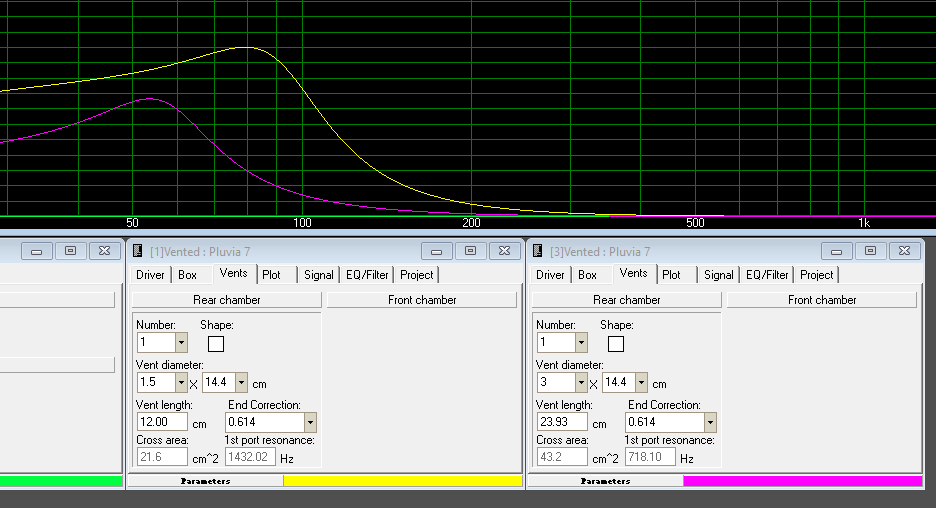 Lastly the ported speaker has much longer group delay than the sealed box which is another reason people describe a slow or one note sound. It’s all about a set of compromises and picking your poison really, good old physics in action!! This only really scratches the surface! 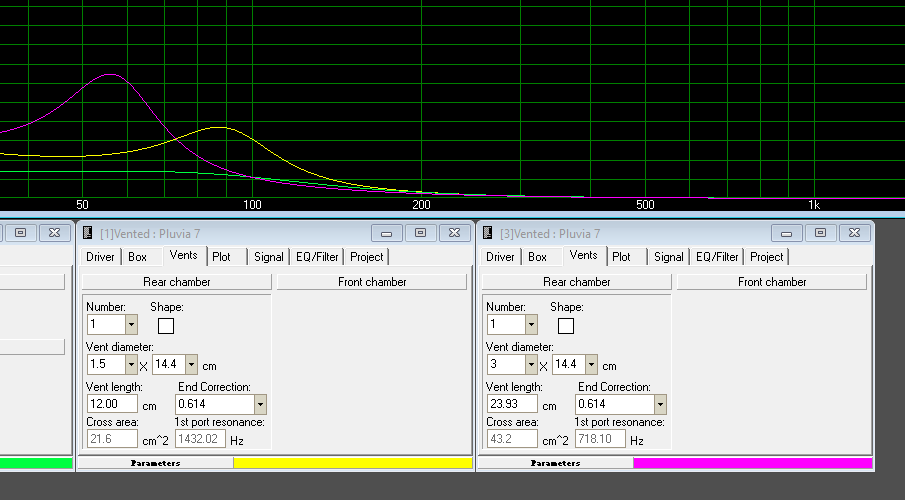 This site uses Akismet to reduce spam. Learn how your comment data is processed.

Categories
Recent Posts
We use cookies to personalise content and ads, to provide social media features and to analyse our traffic. We also share information about your use of our site with our social media, advertising and analytics partners who may combine it with other information that you’ve provided to them or that they’ve collected from your use of their services. You consent to our cookies if you continue to use our website. Rejecting the use of cookies may affect the ability of the site to work properlyAccept Reject Read More
Privacy & Cookies Policy

This website uses cookies to improve your experience while you navigate through the website. Out of these cookies, the cookies that are categorized as necessary are stored on your browser as they are essential for the working of basic functionalities of the website. We also use third-party cookies that help us analyze and understand how you use this website. These cookies will be stored in your browser only with your consent. You also have the option to opt-out of these cookies. But opting out of some of these cookies may have an effect on your browsing experience.
Necessary Always Enabled
Necessary cookies are absolutely essential for the website to function properly. This category only includes cookies that ensures basic functionalities and security features of the website. These cookies do not store any personal information.
Non-necessary
Any cookies that may not be particularly necessary for the website to function and is used specifically to collect user personal data via analytics, ads, other embedded contents are termed as non-necessary cookies. It is mandatory to procure user consent prior to running these cookies on your website.
SAVE & ACCEPT